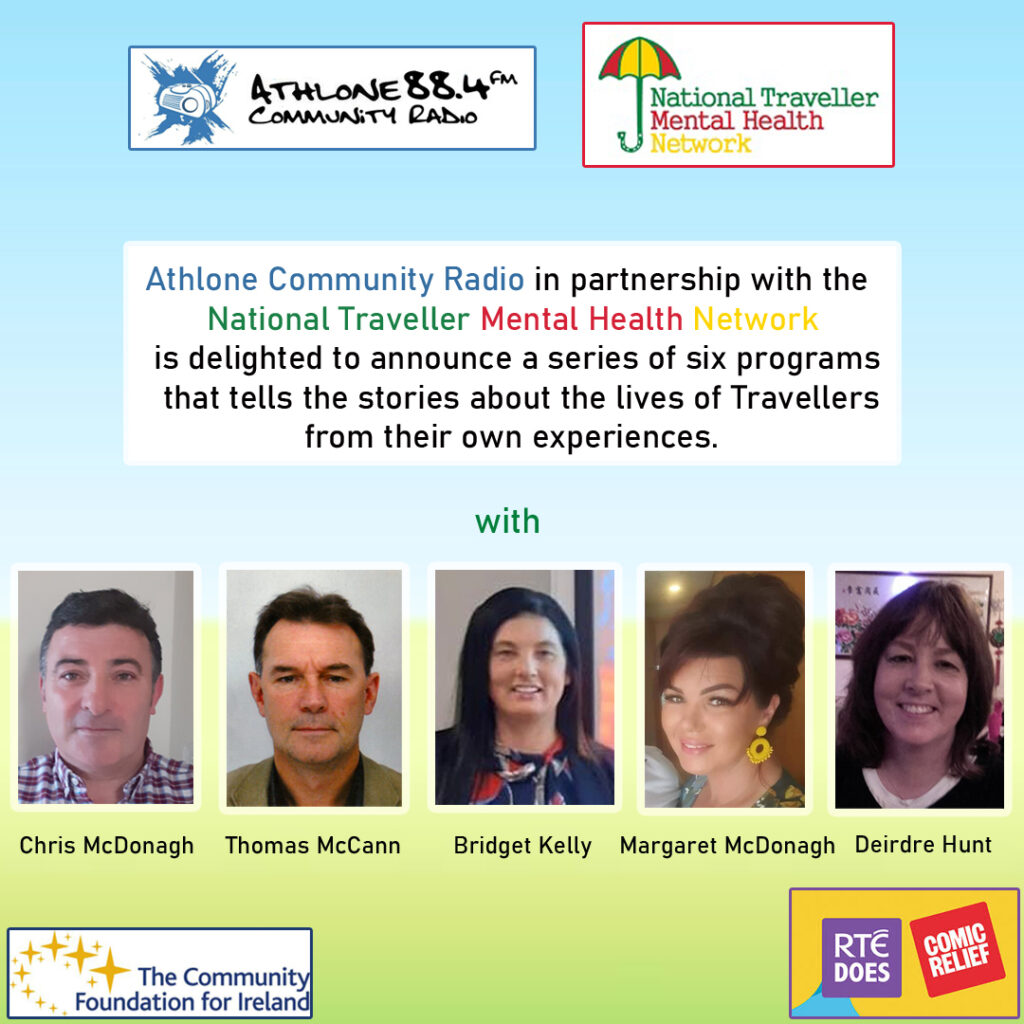 Travellers Lives – A Journey into Culture.

Athlone Community Radio in partnership with the National Traveller Mental Health Network is delighted to announce a series of six programs that tells the stories about the lives of Travellers from their own experiences.
“I am actually quite excited by this, I can’t recall a situation like this where we have four Travellers talk to each other, and I am just delighted to be invited to be part of the conversation, and also to see it happening” said Oein De Bhairduin, Author and one of the panellists.
This is the first time that programs have been researched, recorded and presented by members of the Travelling community, and the aim of the project was to reach out to the Traveller Community and the settled community, to raise awareness of Traveller Culture and the issues faced by Travellers in Irish society.
The series of programs includes panel discussions and interviews with well known members of the Traveller community, plus music, stories and song by well-known Traveller musicians, singers and song writers.

Chris McDonagh and Bridget Kelly are joined in program two by Mags Casey, Chairperson of the National Traveller Mental Health Network and Martin Ward, Manager of Bounce Back Recycling in Galway. Today the program will look at the high unemployment rates and the high suicide rates within the Traveller community in Ireland.

Presenters Chris McDonagh & Bridget Kelly bring us Program 3 in the series Travellers Lives – Journey into Culture. Bridget and Chris are joined on the panel by Rose Marie Maughan, a National Traveller Accommodation Officer with the Irish Traveller Movement and Martin Collins, Co-Director of Pavee Point to discuss the accommodation crisis in the Traveller community.

Hugh Friel, Men’s Development Worker with the Donegal Traveller’s Project & Breda O’ Donoghue, Director for Advocacy with The Traveller Visibility Group join Presenters Chris McDonagh and Bridget Kelly for program 4 in the series. In this program they talk about discrimination, racism and exclusion in education that members of their committee continue to experience.

Dr Brigid Quilligan, Manager of the Kerry Traveller Project and Michael Power from the Travellers Voice Magazine join Presenters Chris McDonagh and Bridget Kelly for Program 5 in the series. This program is dedicated to the topic of Ethnicity and LGBT within the Traveller community.

Presenters Bridget Kelly and Chris McDonagh host the final program in the 6 part series of Travellers Lives – Journeys into Culture. They look back on the first five programs and discuss the impact these programs have had on them as presenters and discuss the topics raised with Mags Casey, Chairperson of the National Traveller Mental Health Network and Thomas McCann, Director of the Traveller Counselling Service.

This project is funded through The Community Foundation for Ireland and the RTE Does Comic Relief: Adapt and Respond Grant. The programs are a collaboration between Athlone Community Radio and a group from the National Traveller Mental Health Association